After an accident which I got to know recently, I decided to discuss with a doctor – also into ropes – about the possibility of a deep venous thrombosis caused by ties on the legs.

While doing bondage the risk of deep venous thrombosis is related to long protracted ties on the legs, in particular to forms like the futomomo, in which the leg is folded in on itself.

Generally, the onset of a thrombosis takes a long time, but this time can be reduced if there are factors of risk, like taking the birth-control pill, being overweight, etc. If on one side you actually don’t need hours to realize a tie, on the other a session can last a lot of time. If the game is protracted for a long time it’s good to take into consideration that specific ties – for example, a futomomo – cannot be carried for an indefinitely long time, in particular if there are factors of risk.

Most frequent factors of risk: 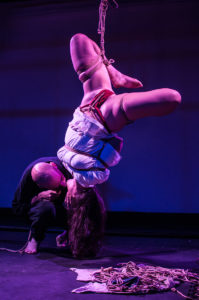 How can a deep venous thrombosis occur?

The venous blood flow which goes from the legs towards the heart is set off by the pumping action made by the pressure of the foot sole and the muscles of the legs; when you remain seated for a long time with folded legs – for example during a plane ride – a stagnation of blood can occur and cause a thrombosis, that is the formation of clots (thrombus) which can slow down or stop the blood circulation. The formation of a thrombus can also occur because of a trauma in a blood vessel.

The thrombus can dissolve itself autonomously, it can become bigger or break itself and enter into circulation; in this last case a clot can travel in the circulatory system up to the lungs and result in a pulmonary embolism.

What are the symptoms of venous thrombosis?

The symptoms of thrombosis are pretty sneaky since they can appear on the spot but also after setting the leg in movement again and at a distance in time; moreover, a thrombosis can also be asymptomatic. The symptoms include swelling, redness, intense pain and turgidity of the superficial veins at the level of the legs.

If the thrombus reaches the lungs it can cause a pulmonary embolism.

What are the symptoms of a pulmonary embolism?

The symptoms of a pulmonary embolism can be a pain in the chest, difficulty in breathing, cough with phlegm mixed with blood, feeling of fainting, tachycardia; in the most serious of the cases loss of consciousness and death can occur.

What can be done when these symptoms occur or you have the doubt that something went wrong?

The best solution is going to an emergency room; a thrombosis or an embolism, if diagnosed on time, can be cured and won’t present serious consequences.

Can someone who suffered from venous thrombosis do bondage afterward?

Unfortunately, the activities with ropes on the legs must be avoided by the ones who suffered a deep venous thrombosis in the legs; instead they can safely have their chest tied. It’s recommended to wait at least two years from the complete recovery of the disease.

However in any case you must be tied above the zone in which the thrombosis has occurred: if for example the thrombosis occurred at the level of the calf, you have to be tied starting from the thighs.