SSC and RACK: two side of the same coin 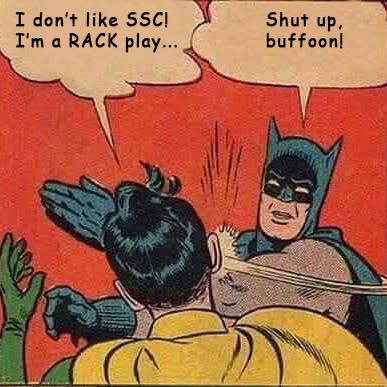 After reading again and again “I don’t like SSC. I’m a RACK player” I couldn’t handle the Christian Gray kind of guy anymore ! The crap-detector went off.

I guess many of you know what these two acronyms mean.

This expression appeared for the first time in 1983 New York Gay Male S/M Activist (GMSMA) newsletter, a group of gay and sadomaso activists in New York.

The newsletter contained this declaration: “GMSMA is a not-for-profit organization of gay males in the New York City area who are seriously interested in safe, sane, and consensual S/M.” (1)

This expression is attributed to david stein – and apparently he himself proposed it – even if the entire declaration was the work of the whole association.

The old saying “safe and sound” has roots in the expression “Have a safe and sound Fourth of July”; in fact, during the celebrations for the Independence Day of the United States many families used to barbecue and to fire fireworks, but sometimes everyone ended up setting their house on fire or losing their fingers.

Some argue that many sadomasochistic practices cannot be completely “safe” and that what is “reasonable” for one person may not be for another.

Let’s clear up this misunderstunding. “Safe and sane” doesn’t mean that everything should be one hundred percent without risk, but that it should be as much as possible!

Let’s listen directly to david stein’s words: “The strategy was not to try to redefine ‘S/M’ itself as inherently ‘safe, sane, and consensual’ […]. Neither those of us who drafted the statement nor GMSMA’s board were that naive. We knew that the full range of real-life S/M […] can embrace much that is unsafe, insane, and nonconsensual by anyone’s standards. […] We knew that “safety,” especially, differed from one individual to another. […] Being responsible, being aware, doing your homework, taking precautions, that’s what we meant by ‘safe’. […] S/M can be damaging, crazy, or coercive, but it doesn’t have to be, and together we’re going to learn how to tell the difference.” (1)

The declaration continued “We aim to raise awareness about issues of safety and responsibility […] and to disseminate the best available medical and technical information about S/M practices.” (1)

“Chanting ‘safe sane consensual’ like a mantra can’t save you from a bad scene or a bad relationship, and it can’t replace the years of study and practice that guide an experienced top or bottom, dominant or submissive through the maze of choices both must confront.” (1)

So, the intent wasn’t regulatory.

So then came up another acronym: the RACK,  suitable for those who do “really extreme stuff”.

Sorry, no, “RACK” didn’t rise for these reasons.

“I proposed RACK (Risk-Aware, Consensual Kink) as an alternative. Here’s my motivation: nothing’s perfectly safe. […] The “sane” part of SSC is very subjective. […] RACK is admittedly more confrontational than SSC. […] RACK allows us the freedom to have non-PC (politically correct) fantasies.” (2)

Gary Switch tells it us.

So, RACK clarifies some aspects of the SSC, but it doesn’t welcome whatever comes to mind. Talking about RACK means that you are aware, but also informed and technically prepared about the risk. “There’s risk and there’s incompetence” (3)

In short, those who “invented” the SSC knows that nothing can be perfectly safe and on the other hand whoever proposed the RACK clarifies that in any case a practice must still be as safe and sane as possible. And all of this is extremely… sane!

The important thing is not to take sides on a certain acronym to protect ourselves from our possible mistakes or to appear cooler, but to take care of the partner, communicate, negotiate well and pay attention to what you do (which are terms that have been summarized in another acronym – the CCCC).

So, when you hear that bondage, whipping or another activity is “RACK e non SSC” or that “I’m RACK, not SSC”…well, take it as an alarm bell that probably someone is trying to screw you!

“Down with acronyms, up with communication!” (3)

History of (not only) Japanese bondage