How to create your first set of ropes

Sometimes, couples come to my basic courses having already experimented with bondage in their intimacy, but they often do it with unsuitable ropes: poor quality sets bought online, very hard ropes found at the hardware store, braiding ropes, etc. The result is that those who tie get frustrated because the tiesdon’t come out right and those who is tied up complains that the ropes are too hard or rough.

When I started doing bondage many years ago, it was almost impossible to find Japanese asanawa, and at that time I used European jute ropes or hemp ropes.

Of course, in our play, we can experiment with different materials: for basic bondage or “bedroom” bondage we can also use cotton ropes or even ties, scarves, socks, etc. However, if we want to do Japanese-style bondage, the best choice is to use the “asanawa“, a Japanese jute rope.

Fortunately, asanawa can now be bought cheaply from online shops – such as japanropeshop.it or shop.andrearopes.com – or from your teacher. 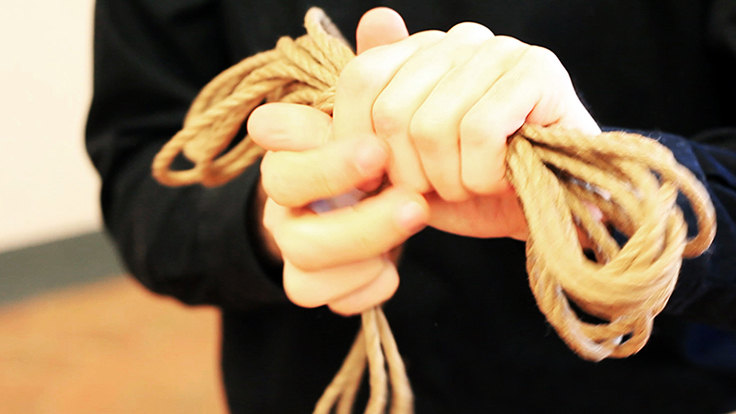 To create your first set of ropes, I recommend you take four eight-metre ropes with a diameter of six millimetres. If, as you continue to study, you find that you need longer or shorter ropes, you can then adapt the length according to your needs.

Japanese ropes also do not require much preparation: just run them over a cooker to burn off the lint and possibly spread a little vegetable oil on them.

Also bear in mind that a quality rope has a very long life: if kept carefully, the life of a string can be measured in years. When you find that your ropes have become too worn or smooth, you can still use them for floor play or as a disposable rope in situations where they might get dirty.

I hardly ever throw a rope away. In fact, each set brings with it many memories: the memory of workshops or performances I have done, the set I bought many years ago in a Japanese store at prohibitive prices, the rope that was given to me by a certain teacher when I went to class. In the studio I still have the string that Yukimura sensei gave me when I studied with him.

So, if you want to start bondage, out of respect for those who offer their bodies for play, use quality ropes and you will see that bondage will be even more beautiful!

Bondage, shibari and kinbaku: let's get to know them