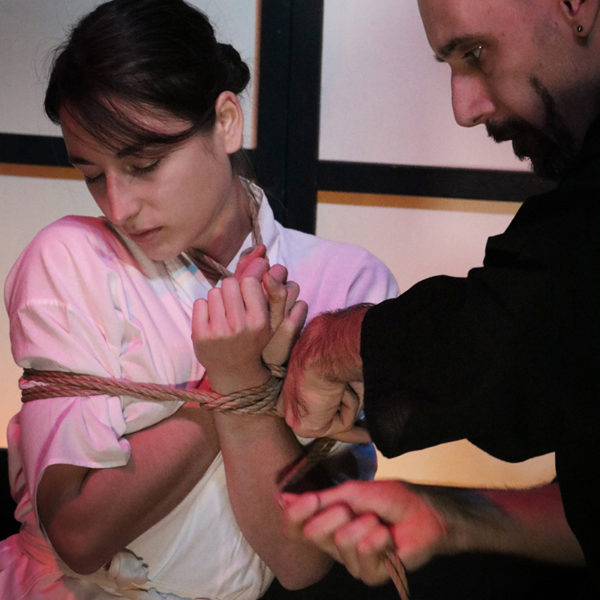 I heard this word for the first time about ten years ago (around 2010) by Esinem in a workshop in Milan. He was the only rope artist in the West using that word and tying that way in those days.

Esinem developed his own “ipponnawa” style: a free and sensual way of tying, based on communication with the partner, without using any specific pattern or technique, never definitively closing the tie but continuously untying and tying different passages.

I sometimes use and teach ipponnawa, both as technique per se and as a way of playing with ropes for beginners or, in more advanced ways, for expert students. Tying with one rope can be sensual or rough, it can be a way to start a session or you can play this way for a long time. In short, it’s a possibility.

It’s important to note that maybe no Japanese rope artist teaches “ipponnawa” as technique per se, much less in the way that Esinem developed.

Also Denki Akechi sensei, in an interview on “The adventures of sex” by Satake Taishin, told the “even just with one rope you can move to pleasure or inflict pain” (thanks to Nuitdetokyo for giving me the permission to share these informations).

For a long time this way of tying has been wrongly called “ichinawa” (from “ichi”, one, and “nawa”, rope), because this has been the term used for a while by Esinem, probably due to a misunderstanding of a Japanese translation.

I noticed that even today there are some workshops or online tutorials using “ichinawa”, so let’s say a few words about why this isn’t the right translation.

In Japanese there are many ways of counting items, called “classifiers”, used depending on what are you referring: there are classifiers for long, short, rounded things, big animals, little animals, toy animals, cars, books, etc. Ropes are in the “hon” (本) category, so you can count “ippon” (一本), “nihon” (二本), “sanbon” (三本), or one, two, three objects in this category. Following this counting method, the right translation of “one rope” is “ippon nawa”.

Also “ichi” means “one”, but with a general meaning, not referred to a specific category.

It’s true that there is the “Ichinawa kai” (一縄会) or the group (“kai”) of rope artists created by Kinoko Hajime, but this name is a wordplay between the name Hajime (that means “first” son) and “ichi” (that means “of the best quality”). The kanji (一) is the same but with two different pronunciations, so “一縄会” means both “the group of Hajime’s rope” and “the best rope group”.