I knew Swirl during a workshop. After a little online conversation, we met at my studio to play with ropes together.

The day after I found on Facebook this long post by her. She rattled off some impressions about our session.

After a few years, I found this post again by chance and it was very touching to read again her words. So I asked her permission to publish them.

I hope that you can get excited through her words. 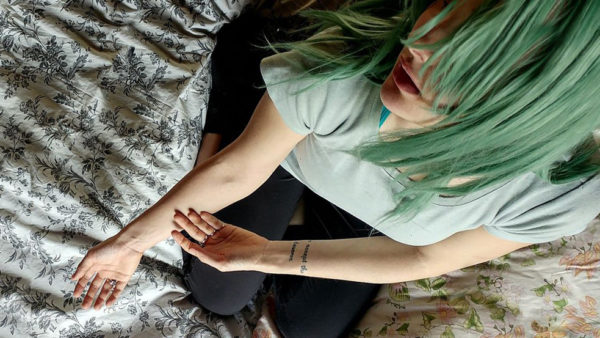 This is the kind of post that will knock my mom’s eyes out. Probably she will come to the door to tell me that it’s not good to write about these things.

She’s right.
But I’m sorry mom, this morning I got tied up, even if it’s not good.

People know I don’t mince words, so I can add it was incredible. It was like the stinging feeling when you dip a toe in the boiling water in the tub. It was like that time of uncertainty before indulging in the hot embrace of the heat and the water, like the feelings of your body, your heart, your thoughts, your breath slowing down until almost you disappear.
You close your eyes since you want to doze off with your head leaning on the edge of the tub, with his shoulders, his rope, his breath in the silence and the music fading off.

Let’s start by when the master told me to play with ropes together and I answered: “Willingly”.
It’s normal, isn’t it, that the local rope master sends you a message because he saw you in some photos, saw you in a class and he understood your potential in being his “test animal”.
Wait, no. “Test animal” isn’t the right word. He tries his art on me, but I’m active too, it’s an exchange, a duet, and my whole being, my existence, are there to go along with him in the dance of the ropes.

Help me please: how can I define who allows being tied all over the body putting them life in someone else’s hands just on trust?

I think the right term is “conjoined”.
Like twins.

Kinbaku means “tight binding”.
If you try to google this word, the first shoots you find are some wonderful rope trees with a stoned heart and a suspended girl in the centre.

I haven’t called it “art” at random. The body is the first artistic representation of beauty in nature.
We are fascinated by the power of the body when we watch it with an enchanted and suspended gaze.

The room was cold, but it was bearable.
He asked me to sit on the knee, with my back on him.
He caressed the skin of the arms, not with his fingers, but with his whole hand, as he should console me.
My feed touched his legs. Yes, we were so close.

He took my hands and brought them behind the back, grabbing them with one hand while with the other he controlled my shoulder, checking there weren’t involuntary tensions in the arc of my arms.
There weren’t.

Then he did what made me filling “conjoined”.
I’ve never seen the master alone, I’ve been never tied up by him alone and he, hold on me, simply put his forehead between my blades.
A door opened in front of my chest, a light entered inside me, I felt in total harmony with him, as we were the one the projection, the extension, the link of the other.

I felt some mixed emotions I had to rattle off later.

First, undoubtedly, motherhood. It was a gesture of tenderness that got a smile from me, relaxed me and appeased my whole body.

Second, trust. In the silence this gesture told me:
“Hey, I’m here, I will abandon myself to you if you let yourself abandon to me.”

Third, humility.
“I’ll be the strength that supports and hurts you at the same time, but you have to know I’m here for you.”
Isn’t that a comparison with love?

I was there, lightly suspended, with my body laying to the gravity, my soring wrists, my head leaning on the suspension line, and his hand, his rope twirling on my neck, one, two, three, four times.

My pulses were slowed down. My mind was an empty box.
At that moment, with my neck in a vise, a thought occurred to me.

“Ok, I’m dead. I embedded in this story and now I’m dead. It’s the natural selection! I should have thought about it before. I’m dead.”

Sometimes he laid a finger in my hand and I squeezed it as a baby does. I smiled.
We squeezed our hands, we watched in our eyes. He embraced and caressed me.

No, I’m not dead. I could breathe, but I would’t. Like in the tub when you are plunged in the boiling water between life and death until you reawoke and the world is still looking at you.

Does it hurt?
Yes.
Would I do it again?
Always.

What did I win being tied?

You must have a healthy relationship with your body, you must feel at ease because you put yourself in the hands of another person.

With my condition in adolescence I had trouble because I could NEVER let go. NEVER.
To lose control meant to expose me and to show my weak points.
No one could come near my head. How many times I stayed someone’s hands, how many times I ran away, how many times I’ve closed myself off to something amazing for fear of exposing myself.

This is no longer the case. My weak points are now my strong points.
But not always. Sometimes I still stay on the edge of the ravine and I don’t have a go, because I don’t have the stregth to jump.
Sometimes I sit and gaze the infinity, waiting for the sunset to devour the landscape and to take it away forever.

Not today. Today I took a running leap and…