The importance of ma 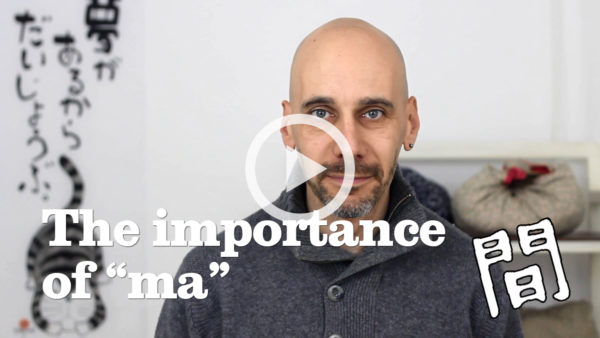 I heard about “ma” (間) during a workshop with Otonawa a few years ago. Otonawa is a Japanese nawashi and a kabuki artist as well.

Otonawa talked for a few time about the “ma” and for everyone in the audience was clear that the concept was too complex to summarize in a brief explanation. Some months later, thinking on my notes, after some readings and some discussion with a Japanese friend of mine and a Japanese kinbaku master, I started to better understand what’s the ma.

In Otonawa’s words “ma” is what there is among the movements: for example when we tie, between a passage and the other, even if externally it seems that nothing is happening, we never stop to create emotions and to have a communication. During the pauses there’s always an energy (“ki” 氣), otherwise the ma isn’t good, it’s nothingness. A good actor must have a good ma to choose and manage the movement speed, in order to obtain a quick change of expression of the mask or to underline a dramatic mood. This creates a “ma”, something between a pose and the following one, giving a meaning to the action.

According to Otonawa’s words, the ma comes from the “seika tanden”, the point under the navel where the body finds its equilibrium and the connection with the cosmic energy.

We can say that ma is a “quid ineffabilis” that discriminates an empty action from the one full of emotions and meanings, “the suspension of the phenomenological existence where mind opens itself up to the perception of the inexpressible” (Lucia Galliano).

Furthermore the word “ma” is used in a lot of Japanese expressions and words:

Ma is also the “rhythm”. A musician with a good ma doesn’t just keep the tempo, but follows the groove, always making some little and creative adjustment. As for western people the rhythm is something stable and continuous, in Japanese aesthetics rhythm in traditional music is fluctuating and changing, in a similar way as Japanese people prefer asymmetry and imperfection to what is perfect and explicit.

The ideogram of ma (間) shows a sun inside a door. This represents “something ‘between’: a time between two events, a space between two elements, a relation between two people or two moments in a person’s life, in everyday life, in martial arts, in art and in theatre” or also a suspension, a pause, a void. In this last meaning is a concept different from western “horror vacui”. In Japanese aesthetics the emptiness, in order to operate its function, hasn’t to be filled but accepted. The ma raises from a space-temporal breach that isn’t just space nor time per se, but it’s simply aesthetical consciousness, it’s “beauty materializing itself thanks to a special condition of breakage” (Nishiyama Matsunosuke).

This “between” becomes a “passage towards infinity”, the breaking of a continuum, the fluctuation of a constant. We can find it in the empty spaces of a print, in the essentiality of ikebana, in the shortness of a haiku, in suspensions of a No theatre performance. The ma is the pause that keeps the tension in the audience, the boat that we don’t know if can resist to the wave, the moment before the shoot of an arrow, but also the resonance when we talk with someone, the feeling of being at home also at someone else’s house, the understanding with another musician, the tidiness and the sorting of a space or of a flower composition.