In this post I will show you five false myths about Japanese bondage that a lot of people, even practitioners, have in mind still today. 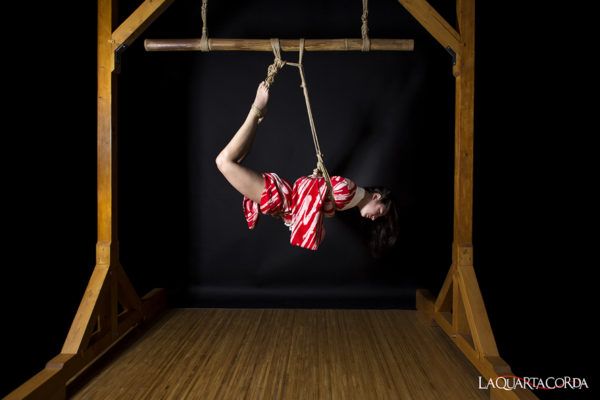 1. Shibari is an antique Japanese art practiced by the geisha.

We start with a great classic: Japanese bondage isn’t an antique and millenary art! Actually shibari was born during the first decades of the XX century at the hands of Itoh Seiu (1882-1961). It’s definitely anachronistic dating it during the Edo period (1603-1868) or even further back.

Shibari means “the act of tying” o “tie” and it must be pronounced [ʃɪˈbari]. Kinbaku means “tight binding” and the pronunciation is near to [ˈkinbaˈku], as if both the first and the third syllables were stressed.

Please note that “kinbaku” is written with N!

It is a practice that is connected to the sphere of sexuality and there’s nothing to be ashamed of for this reason. If we go beyond the idea that sexuality is not only having sex, we realize that there is a continuum of possibilities of interpersonal expressions between two people where bondage can find its collocation, being practice among friends or something more intimate, having a caressing or a more strong style, etc.

Moreover there’s no connection at all between the position of the knots in a tie and the pressure points of shiatsu or acupuncture. Yes, you can also read this in some online posts!

4. Shibari is a form of martial art that you can practice in a dojo.

Sometimes the places where bondage is taught are called dojo… but this happens only in the West! Actually almost the totality of Japanese teachers wouldn’t call his school “dojo” just because martial arts have nothing to do with this.

The most used terms to call the one who ties and the one who is tied up are “top” and “bottom”, since these terms don’t indicate any domination-submission dynamic between who play with ropes.

Other terms like “bondager” (a word that doesn’t even exist in English) or “roper” (literally “ropemaker”) are fortunately no longer used.